BookCharacterDay2016 - Kizoa Movie Maker - Video Editor
On Friday 28th October Auroa Primary School held our 2016 Book Character Day. The students were able to come dressed as their favourite book character with some amazing costumes - we also had some of the teachers dressing up as well. This slideshow was created by Aroha and Ashley from Room Three.
Posted by Myles Webb at 21:04 No comments:

The second part of this weeks special double episode - 'High Fall' saw the teams racing to complete opposing in one minute and score a point for their team. Kikorangi were looking to finish the team competition on a high before the merge into one team.

Stakes couldn't be higher - but in an amazing result that no-one would see coming not one but two immunity idols would be played in the vote that followed... whose game was about to end? Whose time was up? Who broke their teams trust and whose moving forward to the finals? All these questions can be answered in episode 11 of Taranaki Survivor the greatest online student blogging competition of all time!

TaranakiSurvivorEp11 from myles webb on Vimeo.

Its a special week at Auroa Primary School, its Book Character Day this Friday - when students from School are able to dress up as their favourite Book Character.   To show you some examples this is the efforts of some of our students from way back in 2014! Including the winners for 2014!
Posted by Myles Webb at 09:45 1 comment:

Back from a short holiday hiatus the greatest student blogging competition of all time returns with a vengeance - everyone was awaiting the final team, however there was a twist - the two teams were reconfigured for another round of competition and two new players were added to the competition! Both teams realised the stakes couldn't be higher! Who would work together in their new group? Who would struggle to make adjustments? Whose game would fall short? Who would join Ebony as the second member of the 2016 Jury? All these questions are about to be answered in the tenth episode of the greatest online classroom blogging competition of all time... TARANAKI Survivor!

SurvivorEpisodeTen from myles webb on Vimeo.

R3 Q and A from France 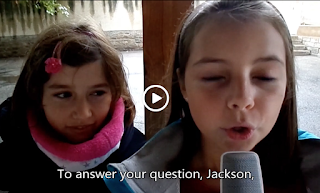 Our friends from CM2 in Brindas, France have been helping again with our learning of French and finding out more about living in another country.  They've just produced an amazing video which features their students answering questions that were asked by the students in Mr Webbs French Class.  They have had students roaming their school searching for the answers...

You can click on the link to their amazing video and their fantastic school and class website by clicking on the link here.
Posted by Myles Webb at 17:18 19 comments:

On the 13th of October I arrived at Auroa School for Lamb and Calf Day.  My next door neighbour wasn’t there so I waited and waited.   After a while I saw Ashleys car and went over to see her, after a while I saw Alison and Rob with the calves.

I helped get the calves out and tied my calf Honey up took the cover of and brushed her for a very long time then I walked over to the rings and waited for the juniors to finished.   Finally it ended then I had to wait for my number to be called.  Finally I was was called I was at the end waiting waiting finally it was my turn I walk the M and did a circle around the middle peg stopped when I was told then finished.  Mum said that I did it beautiful then it was ribbon time the judge called my number first then more people I can’t remember the order but I first I was so proud.

I was still waiting in line then we started walking it was rearing the judge looked at all calves then my calf.  Then stood in the middle then came back and looked at my calf again then I was told to come in the middle then more people were told I got first place and champion.

Waiting, waiting, “finally” I had to go to the ring where the grand supreme champion judging was.  I lead first I walk up then on a angle then more people lead then we walked in a line and stop the judges looked at all the calves then I was told to come up then Freddie I got grand  supreme champion then I helped put the calf's in the trailer then I did a cartwheel and hit Freddies jaw, fell on my head pretty hard and twisted my neck then we went to Hawara.

Mrs Osika Class in the USA is located here.

Merrydale Junior Blog in the UK is located here.

Email ThisBlogThis!Share to TwitterShare to FacebookShare to Pinterest
Labels: Quadblogging 2016 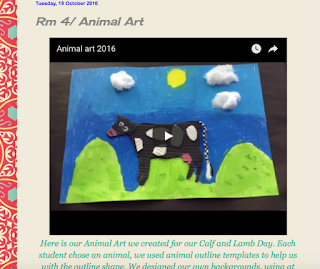 There's been plenty happening at Auroa Primary School in the last week - our biggest event of the School Year, the annual Lamb and Calf Day, took place on Thursday of Week One, Term Four. You can see the art from Room Four for this event by clicking on the link to their brilliant class page here.
Posted by Myles Webb at 22:15 1 comment:

Its the second week of the New Zealand School holidays - and we've some huge events coming up Term Four - first week back on Thursday we have our biggest day of the School year, our annual Calf and Lamb Day. We have students who have been raising Lambs and Calves for this event and the judging competition. This video below, created by Mr Bloor is the highlights from 2014 and shows our Lamb and Calf Day that year.