This page of exemplars from the 2014 School Year.  To see material from 2015 onwards you need to visit a separate site showcasing the work of our students: 3D Print School (click here).

November Update: We've just purchased two Ultimaker 2 3D Printers.   These machines are amazing and have made a huge difference to the quality of the students prints.  Firstly our students have been able to complete their digital 3D Printing Portfolios which detail the entire process.  This is the first example completed by Tahana from Room One.


Secondly its allowed us to create more material.  One very special video is created by Alyssa and Michael and its the creation of a tilt device for Alyssa iPad to allow her to use it better.


One of the items that we have in class and were really excited to be using is our schools 3d Printer.  We ordered it from Mindkits and are very excited about the projects and the work that we've come up with already.

Our first student driven process was the replacement of a cupboard hinge in our classrooms sink.  The boys involved in this, Michael, Logan and James, identified the problem, which was the hinge on the cupboard door was broken.  Michael then took the time to sketch the issue. 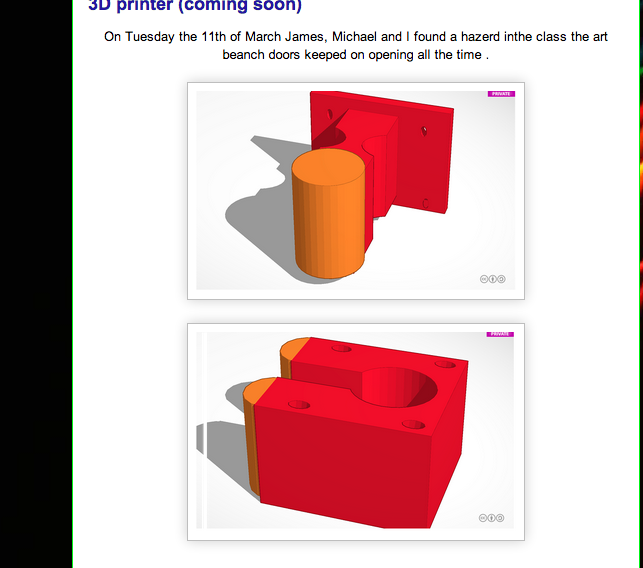 From this diagrams the students went to Tinkercad to create the three dimensional models of the hinge and printed out the prototypes.  Once this had been done the students were involved in testing the size of the hinge, trying the different versions to see which one worked best and then readjusting their design and printing it again.

The boys have been through the entire process by themselves. They have identified the problem, they've drawn plans up about what they want to create.  This is an ongoing process, not solved yet and we will continue to update this page.

The process and the students were featured in the South Taranaki Star on Thursday 12th June 2014.
This slideshow shows the process to complete the door hinge in the steps the students went through:

This video below is of the boys who created the project and the steps that they went through to solve the problem.  Created by Michael and Logan on Thursday 3rd July 2014.

As of November 2014 we've been thrilled to purchase two new Ultimaker2 3D Printers from Mindkits.  These printers are amazing and have the students working flat tack to complete projects that were outstanding before the end of the year.   We will be archiving this page shortly and replacing it with the up-to-date work that reflects exactly what the students are producing at the moment. As of May 2015 you can watch this video produced by Auroa Primary School's Jason Bloor detailing the Technology Program