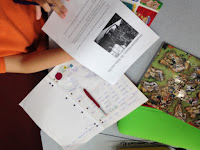 Today in class here in New Zealand we spent time looking at a piece of writing - nothing unusual in that however we were looking at a story written by two students in Mrs Yollis classroom in the USA, Nolan and Elie.    We loved reading their writing in class - we were all given a copy of their writing, we shared it to every student and converted it to a google doc. 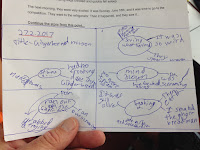 We then created a plan for our writing - the story by Nolan and Elie was left at a cliffhanger and our challenge was to end it! When we created the Google Doc we shared it with Mr Webb and also Mrs Yollis.  This created a surprise for our students, because while it was Monday mid-day here in New Zealand, it was Sunday afternoon in California and Mrs Yollis was online and started editing our work.   You can read the original post by the students from Mrs Yollis classroom here and we will be posting our work in the coming days.
Posted by Myles Webb at 15:34 1 comment: 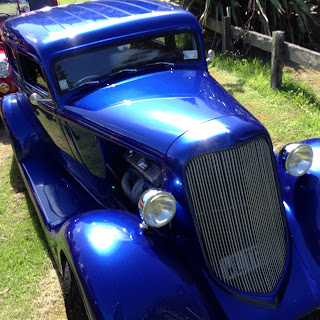 "That car is sick!!!" I can't wait its the Americarna!

It was time to go on the bus.  It was soooo funny on the bus because everyone was singing, they were singing juja on that beat, abcds, wheels on the bus round and round.  It felt like we were singing for ages but we weren't.

Finally we are there! First we have to walk down there, and now were there.  As soon as I looked down the road there was a flash orange car, it was mean, it had big black wheels.  Next there was a pink car, yup - a pink car it was flash as well.   All of the cars were flash they were awesome but the one thing is that it was HOT!

It is soooooo hot it, it was sooo hot I felt like tipping frozen ice over me! Thats how hot it was, I also felt so tired. 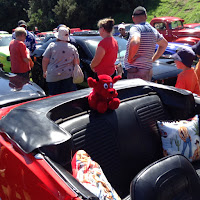 The cars were colourful there were lots of orange, red and yellow cars.

It was so funny because there was a skeleton in a car.  It had a cigarette in its mouth and there was also a dog in there.   It was so awesome at the Americarna.

Recount Written by Georgia from Room Three, about the Auroa Primary School visit to Opunake Beach for the 2017 Americarna show.
Posted by Myles Webb at 12:10 No comments: 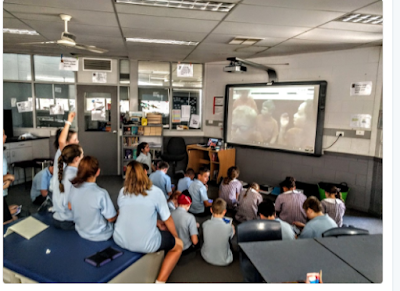 Yesterday we held another #mysterySkype - this time with the students and staff from Good Shepard School in Canberra, Australia.  This was a fantastic experience which we found a bit difficult because we didn't know that Canberra has its own state in the middle of another state, making it a bit hard to locate on the map.  Another great experience! If you would like to organise a #mysterySkype with ourselves or another class at Auroa Primary School please let Mr Webb know!
Posted by Myles Webb at 08:24 No comments:

Today Auroa Primary Schools Y5-8 students travelled to Opunake Beach to view the 2017 Americara Show.  At Opunake Beach at nearby Opunake we saw a parade of classic America cars well over 500.  It was an amazing experience for our students and these were some of the pictures that were taken on the day.


Froncois2017 - Kizoa Movie - Video - Slideshow Maker
We're very lucky to have contacts and friends from all over the world that we interact with and learn with. Our friends from CM2, Brindas School have sent us a very special gift, a mascot for our classroom, Francois the Chicken complete with an Olympique Lyonnais Scarf! Some of the Room Three students took pictures around Auroa School of our new friend! You can click on the link to their fantastic blog here!
Posted by Myles Webb at 15:36 4 comments:

This is the link to the Connected Learners Blog in Australia.

This is a fantastic class blog with lots of information and material and is run by Mr Lamshed and Mr Natars and is Y6/7 level.

You can click on the link here.
Posted by Myles Webb at 12:43 No comments: 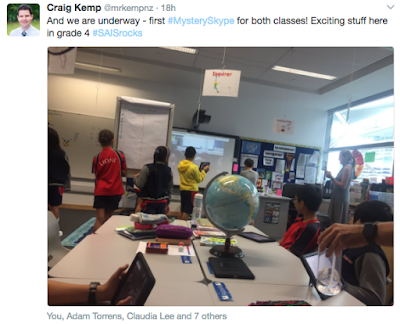 Yesterday in class we completed our first International Mystery Skype for 2017.  We had to guess about the location of another classroom that we were Skyping around the world.

It turns out that the class we were Skyping with was from the Stamford American International School in Singapore.

As only Mr Webb had been to Singapore it was a bit hard to understand some of the differences for the people of Singapore. We Google Earth'd their city/country as well and were amazed by all the buildings and the fact that we couldn't see any farms! It was a fantastic learning experience for our students and we look to do some more during the year.

A special thanks to Mr Kemp from the Stamford American International School for arranging this!
Posted by Myles Webb at 08:03 3 comments:

Taranaki Tennis on PhotoPeach
Today we had a special experience when Sport Taranaki arrived at Auroa Primary School to teach each of the classroom some of the skills involved in playing Tennis, the weather was against us so we moved to the Community Hall to take part in this fun activity.
Posted by Myles Webb at 11:11 No comments:

A Message from France for R3 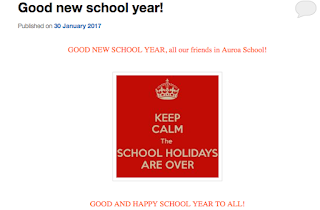 We're really fortunate in Room Three to have contact with classrooms all around the world, and some of our very best friends live in Brindas, France.  Today we received a special package from them which we opened up in the class, more on that later.   At the same time we watched an amazing video created for us from our friends on the other side of the world.  You can click on the link to their class page here and we look forward to another year of working together!
Posted by Myles Webb at 21:20 1 comment: