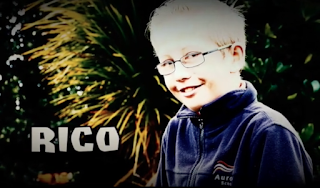 Arguably the most untrustworthy player ever to play the game... last season if there was a point when it went all downhill, where the 'Outwit... Outsmart and Outplay...' part of the game took hold... Kikorangi had two leaders who were working together to build a team based - until episode five...  just confirmed today... back for the 2016 season and a second chance at glory or a second chance at infamy... in the greatest internet classroom show of all time!

Rico instigated a removal of the other co-leader the first chance that he got.  Siobhan hadn't put a foot wrong and done everything write for her team... but for Rico it wasn't enough....

He's yet another returning player now confirmed for the 2016 season.

With an oversea's fan club (true!) he's talented and devious - truly one of the most dangerous players around. Can he improve on his 2015 effort? Which if the teams will he end up in?

There's but two days for contestants to have their application videos in before the final selection is made!

Already confirmed for the 2016 season are Natalie, Ebony, Caro, Jayden and Regan. Confirmed officially today are Rico to be joined by Aroha and Ashley. That leaves only 11 spots up for grabs for potential contestants - which means that some of last years group will  miss out... will Harry step up and come back? Will Bethany the most unlucky player from last season whose game was ended by a single vote try again? Who is still to apply
Posted by Myles Webb at 22:09