How to Survive A Cow Attack! Guest post by Jessie@Panmure Bridge 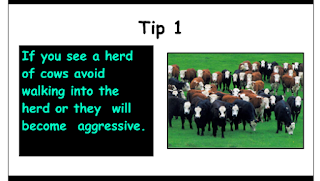 We're always looking for work and examples of interesting things to share and think about. Today Mr Webb found a post written by Jessie from Panmure Bridge School in Auckland. It was entitled 'How to Survive a Cow Attack' and had a series of tips and information about what to do in a cow attack. We used it as a reading exemplar and worked our why through it. Some of the questions caused discussion and sharing of experiences from our class. Some of the examples we agreed with and some we weren't sure about. We went through each of the statements from her display and Paige from our class took notes.

It was a really interesting experience for us to use our existing prior knowledge, make inference about some of the slides that Jessie had come up with and see what statements we agreed and disagreed with.

Tip Two, which is to the right we did agree with - we did a survey of who had Cows at home or next door to them and nearly everyone in the class did.   Most of the injuries that people had received were 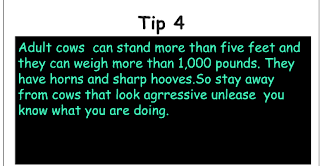 based around the Cows being scared or not realising a person was there (being stood on during milking or being kicked in the face during teat spraying).

Tip Three really caused a great discussion in class.  We thought that in some circumstances it did apply and in others it did not.   We used inference in Tip Four to think that the information came from being online because it said 'pounds' and in New Zealand we use Kilograms to measure the weight of a calf or a cow.