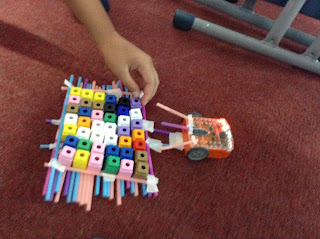 I'm sitting here with straws and tape beside my group. We are beginning to build our
double trailer for our trusty robot  we were given. The first part was tough without
covering the sensor so that we could drive straight and stay safe. We thought we
were going to lose the race. Suddenly luck came we came 3rd with 30 blocks. We were all happy and had a lot of fun. On the 13th of June we started a bot competition but we didn’t get to finish so it carried on the the next day. On Wednesday the first thing we did was the bot challenge. In my group was Caitlin and Sarah. The challenge was who could carry the most blocks.and our group came second with 80 blocks. Your whole creation had to cross the line. and the line was two meter. Some people got out because one of their blocks fell off or they did not make it over the line. 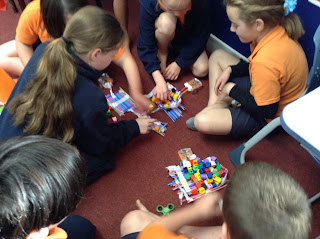 We started a robot Competition on the 14th of June 2017. We had to make a robot out of straws and masking tape. We had to make something attached to the robot to hold the blocks. We had to be in teams of three. Sarah, Zoe and I were a team. We made a trailer. The robot had to go two meters. Every robot that crossed the line had a chance of winning. You could restart it 3 times but no more than 3. Every robot that crossed the line you had to count how much of blocks they could carry across the finish line. The one that crossed the finish line with the most blocks won. If even one of you blocks fell off you would be eliminated.